Was Able to Check Out a HK P30S Today.

TBefore I was really interested in the Hk45, I was wanting a P30S or P30LS, today I was able to get my hands on a P30S and I really like the feel of the gun. It's almost half an inch greater in height than a Glock 19 but has the same capacity of 15+1. I've always been a fan of .45s but when you get into the .45s with the capacity of a 9mm, you're looking at one chunky handgun. Even with the more svelte lines of the Hk45, the P30 felt down right nimble in comparison. Might have to get serious about adding one to the stable...
Posted by JD at 9:02 PM No comments:

I logged into the NRA website tonight to look at some materials and lo and behold "Training Counselor" is listed in my ratings. So what this means is that I can teach instructor level classes that I hold ratings for, and any new classes I take, such as rifle or shotgun, will automatically be added to those classes I can teach instructor classes for. Now I just need to get Personal Protection Inside the Home done to get my Personal Protection Outside of the Home cert. taken care of.


The NRA is also working on a "Defensive Pistol" class that will be a little more in depth than the current offerings, and oddly enough the word is that training outside of the NRA's curriculum will be a requirement, to say that my curiosity is peaked is an understatement. Needless to say I'll fight tooth and nail to get into that class once it becomes available.
Posted by JD at 11:14 PM No comments:

Email ThisBlogThis!Share to TwitterShare to FacebookShare to Pinterest
Labels: Training

From Idaho with Love...

Ordered this back in February, the previous OWB I had ordered for the Nighthawk just didn't meet my expectations after some use. It wasn't as rigid as I liked and the holster and the Ion-bonded slide of the Bob-Rail did not get along and there was an issue the the gun "dragging" on the holster. I could have added a wax or something but with the fit/function of my VMII being awesome, I figured I might as well go with Sparks on an OWB as well. I've always preferred straight drop OWB holsters and this should meet/exceed my needs nicely.

It features the steel reinforced band like my VMII, Sparks always does a good job of covering the band, some "copies" don't always do as well of a job in that area. The sight channel is very spacious, stitching, dye, and overall fit are superb. I don't know how they do it, but the way the gun locks into that leather almost sounds like Kydex without that big dimple in the trigger guard area. Initial fit was a little snug, but in about 30 draws it it feels about perfect.

A common theme I've seen on several gun forums is that some members wear their training resumes like a badge of honor for all to drool over in awe, it gets kind of old.

Now all that being said, while I will not fall over myself over one's training history, I will give them kudos for getting out and getting it done. Most permit holders in states that require training will seek out the bare minimum and call it good.

My wife was talking with a contractor working on our house and some how the topic of carry came up and the contractor revealed that he was a "carrier" and my wife informed him that we offer some intermediate classes etc. to which he replied "school's out" and went on talking that he didn't need any more training as he's "got his" and that's good enough... State mandated training is a check mark, not a bench mark and the bare minimum is probably not "good enough" if you think there's even the slightest chance you may have to use your firearm. In some states there is no training requirement and those that carry have no training what so ever.

I will not go into the argument regarding training requirements as there is a fine line in my opinion regarding sensible requirements and an actual infringement of one's rights regarding bearing arms etc.

Any way, a forum member recently asked where we find out about all these training classes etc.,  if you're looking for an intermediate to advanced class, here's a list to start with, start clicking and bookmarking:

This is nowhere near a complete list of what's available, but it's a darn good start.
Posted by JD at 8:49 PM No comments:

Closing in on 3K with the HK45

Since April, between various range trips, three USPSA matches, two IDPA matches and two days at TDI I'm quickly approaching the three-thousand mark on the HK45. The gun has seen little cleaning and has ran without incident. Sometime during the first major cleaning I noticed that the O-ring on the barrel was a little frayed and replaced it. I'm unsure of the round count as the gun was used and the previous owner was active in IDPA/USPSA as well, but the gun doesn't show that much wear even though it's seen draws from Kydex and leather.

The added ambi safety is wearing in nicely as well are my hands, I'm getting calluses in some new spots, most noticeably on the middle finger of my right hand where the mag release rubs a little funny. The gun carries well and It's been primary carry for a couple of months now and rides great in the Milt Sparks VMII. Since shooting the gun I'm improved my points down on the IDPA classifier from 51 to 37, I need to go over the stages and compare my times/pts down to the last two classifiers etc. to see where my times have changed, what's neat is that I also made match most accurate and second most accurate in the last two IDPA matches which I had not done prior to running the HK45, to put it simply the gun and I agree with each other.  The reloads are getting smoother, but I still need to work on them more and USPSA is really good for getting reloading practice.

I'm probably going to replace the trigger return spring in the near future, as robust as the HK design is the one part that has a history for going out is that spring. As I'm  unsure of the round count and seeing that I'm averaging around 700+/- rounds a month (the TDI course is skewing that average big time) and plan on shooting two more matches this month I figure it's better safe than sorry regarding the replacement of the spring.

The gun has digested mainly nickel cased Remington UMC 230gr FMJ but at two matches I burnt through some of the older defensive ammo, mixed batches of 230 gr samples of the following:
Speer Gold Dots, Hydra-Shoks & HSTs, and a ton of Remington Golden Sabers. Again, zero failures of any sort, the gun came with nine magazines and all seem to work well, even when slightly caked with mud.

Overall I couldn't be happier with this gun, the one thing I don't particularly like is the blued magazines, the finish of the slide may be very durable but the magazines were getting a little rusty, but then again with the rampant humidity and my lack of cleaning magazines of late, I suppose it's excusable. I'm torn on the idea of having the mags refinished in Cerakote etc. as magazines are a consumable commodity when it comes to pistols, eventually they are going to have to be taken out of service and replaced.
Posted by JD at 11:16 PM No comments:

Or better known as the "D'eagle", my wife has a thing about movies, if the people aren't doing anything on the cover, it's probably not going to be that good.


The same can probably be said of any cover or trailer that features anyone with a Desert Eagle, the only exception to that rule was probably "The Rundown" as the Desert Eagle was only featured in about the last five minutes of the film and "Snatch"

Prime example  of what I'm talking about... 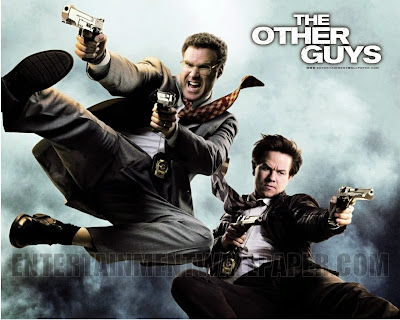 Will Farrel and Marky Mark (I just can't stop referring to Mark Wahlberg as that) in a movie with Dwayne Johnson and Samuel L. Jackson and it totally bit the dust, above you see dual wielded Desert Eagles.

For a list of movies that you can probably safely avoid, all one has to do is visit Magnum Research's own website where they have a "In the media page". Surprisingly there's a few not so bad movies listed there such as:

The Crow
The Boondock Saints
Desperado
The Game
Get Shorty
Gone in 60 Seconds...

And many, many others where the D'eagle has had a better film career than some of the main actors. Every time I see a Desert Eagle pop up on screen it spurns a mild groan and in some cases a death knell for the movie.

So for the last few months I've been geeking out on the Nighthawk and the HK45 but I finally managed to dig the P238 out and try it with the new "flat" recoil spring. I only had 100 rds. of Remington UMC .380 on hand and initially I was still having a couple of crushed case mouths but was able to narrow that down to one of the older generation magazines. I had a 6rd mag with one of the earlier followers, and a six and seven round magazine with the newer style followers and was only getting the crushed casings with the older mag.

The extractor shows no signs of clocking so far, but only time will tell if the gun truly runs well.
Posted by JD at 8:19 PM No comments:

Email ThisBlogThis!Share to TwitterShare to FacebookShare to Pinterest
Labels: Sig 238