Going to be writing up a more elaborate piece later in the week, but off the top of my head some items of interest are:

Colt's RAIL GUN in black Cerakote, I didn't know this at the time but the rail guns have National Match barrels, kind of a nice upgrade for not a whole lot more money. Colt is now using genuine Novak rear sights and a beaver tail that is made in house. All the XSEs, Rail Guns, Gold Cups, Delta Elite, and Combat Elite will have the beaver tails. The when the re-issue of the Colt Mustang goes into production it will have dove-tailed sights to better compete with the Sig P238, if my 238 continues to give me grief, I may just get a new Mustang. No word yet on other Mustang variants.

Colt also has a new rifle coming out, an AR in .308 that will accept 5.56 uppers (MILSPEC of course) and with an adapter kit take 5.56 magazines. The rifle has a monolithic upper and came with a MAGPUL stock...I don't recall which right now, The stock is a VLTOR IMOD if I'm not mistaken.
it's been a long week, I'll scan the flier later on this week.

Galco finally listened to customer demand and is now carrying a dual offset loop IWB called the V-Hawk, it looked like a pretty good holster, reinforeced mouth, body shield and adjustable height which will also allow for switching out loops for clips etc. Should be a good choice for an "off the shelf" rig, the cost may be a little high, but Galco is pretty good stuff.

I'm still torn about the Kimber Solo carry, going to see what kind of reviews the get in the next few months, if I do decide to axe the P238 the Solo may be it's replacement. The running for the replacement is looking like this:

I saw lots of interesting knives, SOG has a Spec Elite Micro? that looked very promising and CRKT has a smaller Hissatsu folder that will probably be finding it's way to my door. Spyderco had some nice offerings as well.

More to come later in the week. Need to review some catalogs, finish a course curriculum, and get back to work at my main job, a week off sure was nice but I'm probably going to be behind the 8-ball for the next couple weeks because of it.

Also, if you're ever in Vegas, you need to see the Blue Man Group
Posted by JD at 11:55 PM No comments:

Sorry guys, we're not here on media passes so no pics for you....

I plan on taking my time today and tomorrow and writing up some details on some products of interest.

I talked with some Colt people about the rail guns, the Cerakoted Rail Gun looks pretty sharp and of interest is that they are bringing back the Mustang Pocketlite. I'll be taking a deeper look at the Colt booth today as well as dropping in on Nighthawk and VZ Grips.

Overall, I'd say the most interesting item to me so far is the much talked about Kimber Solo Carry, provided it goes relatively problem free I plan on eventually getting one.
Posted by JD at 9:56 AM No comments:

So I went out and started testing the extended magazine for the P238, I fired about 60+ rounds, didn't have much time to do more,  and wasn't tracking every round like my previous testing. All seemed well until I started picking up casings and found three or four badly crushed casings.

The extractor doesn't seem to have moved so now I'm wondering if I've all ready worn out the recoil spring  with my test efforts. On a good note the gun itself ran well with the new magazine with no feed issues and the gun is extracting spent cases. Probably going to order some Wolff replacement springs and see if there's any change. If there's no change it will be time to call Sig (again) and rain on their parade some more.

Rounds fired yesterday consisted of Black Hills 100gr FMJ (Factory new) and some handloads a friend made up.
Posted by JD at 7:16 AM 1 comment:

Email ThisBlogThis!Share to TwitterShare to FacebookShare to Pinterest
Labels: Sig 238

So on 1-1-11, Iowa became shall issue, having not been present in any of my previous states of residence when the change took place I can't relate to what happened then but some of what's happening know is just ridiculous.

2: "There's a 30 day waiting period" BS, state law says you have 30 days to issue or deny a permit or the person is able to carry, that's not a waiting period, that's a grace period for issuing authorities to have some breathing room if they get swamped or to keep some from dragging their feet on the issuance. So what does this one particular Sheriff's Office (SO) do? Calls it a waiting period and stone walls the applicants for the whole 30 days (Or rather has implied as such), gee Sheriff, that's really mature now isn't it. Why not stick your tongue out at them as they're walking out the door?

3: Petty complaints from "our side" as well. "They are only accepting application on these days at certain hours"...boo hoo. Guess what, they're not Seven Eleven and have other jobs to do other than issue you a permit. Maybe they are doing this to reduce back log and get people permits to them in a more timely manner by having a buffer to run all the NICs checks? You're going to get your permit, chill out.

4: On the topic of training certificates, one SO is requiring all certificates to have some sort of reference to "Handgun Training" on them, this one is somewhat palatable as the law does specify in part that applicants need to have gone through "handgun training" but seriously? Tel me you're not trying to be a jerk.

There's other instances of "wrong doing" I'm not going to list them all as it's nearing the end of the day for me.

Most of these instances are counties not known for fair issuance practices prior to 1-1-11 so is it any real surprise that they're being jerks about it now?

On a happier note, my Sheriff who was not fond of carry was very pleasant to deal with this morning and while I overheard him on the phone with an applicant discussing training I gave him some cards for my NRA Classes and he even asked if I had a flier to for them to post at the SO. This is a big change from when I talked to him prior to moving to Iowa. I for one am kind of proud of him as I know how he feels about carry but is not making waves and is complying with state law without being a burden to the people.

My new permit should be in the mail box by the end of the week, my SO had a little bit of a wait time as they apparently got swamped yesterday. As it's a smaller department, the dispatcher is the one doing the permits as there is not a dedicated admin staff and it's fine with me if I have to wait a while, she has more important things to do like dispatching police, fire and EMS to their calls.

Just in Time for Shall Issue...

A brand spankin' new Milt Sparks Versa Max II for my Nighthawk Bob-Rail that appears to have been made by the man himself. 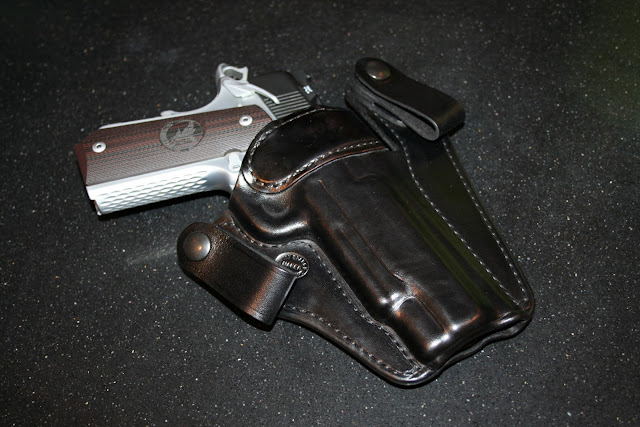 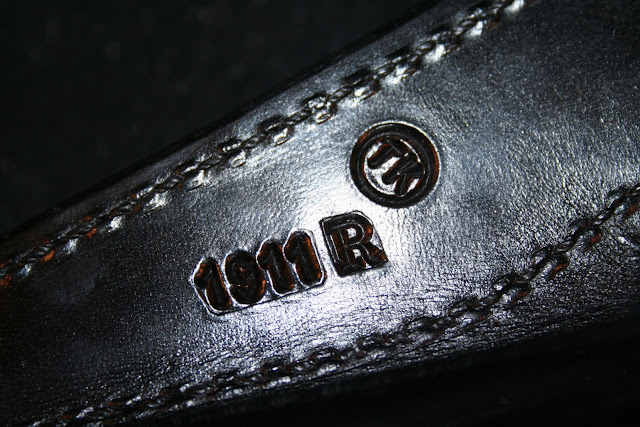 Much thanks Tony K, I still have to give the VMII "Best" (if there really is such a thing) IWB holster available. I ordered this just after I ordered my Nighthawk in June, while I wish I would have had it before now I understand backlog and lead times. Besides, it's not like a VMII for a railed 1911 is a stocking item anywhere.

Tomorrow I'm heading to the Sheriff's office to renew my neutered permit to carry and will hopefully have my unrestricted 5yr permit in hand when I leave.

This is a review from our class with Greg Hamilton of InSights Training back in September of '07, some details of the class may have changed since we took it, but it was and I'm sure still is a fantastic class for those new to defensive shooting.


My wife and I took this course a couple of weeks ago. For the $300 per student it was a damn good class. The lecture was superb, the shooting portion was a little fast, but when you have only two days to learn and shoot, you will feel rushed. One thing that I was not happy about was that the class description quoted 600 rounds as being required and we went home with ammo, I'd guess that the class was probably a 60/40 lecture/shooting ratio.

While I didn't really get anything out of the lecture regarding mindset and tactics, for newer shooters looking to carry concealed who haven't thought about a lot of things, this was a great class. As for actual shooting related topics of discussion I finally got a solid answer on the one thing that has been driving me nuts for over a year, mainly how do deal with my left eye dominant/right handed issue (I'm not going to get into this as that's a whole other story) the important thing is that it helped me out.

On the range I learned a good deal about the finer points of stance, drawing, and reholstering as well as doing lots of "tactical" reloads, clearance drills, and speed reloads. My wife and I are pretty much self taught shooters when it comes to pistols, so a lot of the finer points of how to do shoot a pistol better were new to me and made perfect sense.

Again this is just be being picky, and you'll probably find this at any class you'll ever go to, but if your on the skilled side of the class, the odds of actually getting any help on what you're doing wrong is pretty slim as there will be plenty of others that need the help more than you.

The lectures focused on disparity of force, threat escalation, holster selection, proper sight alignment / sight picture and the difference between the two. Also covered were a lot of the shooting basics and safety rules that are part of every class.