After my trip to TDI I told myself I was going to not be as serious about competing in IDPA and not rush so much to get through the stages. I placed 4th overall in our June 5th match, 2nd place in CDP, and for the first time, match most accurate with 11pts down.  I've been division most accurate a time or three, but never the whole dang thing.

I've made some mods to the HK45, it is now a Variant 9/10, which means that is is no longer equipped with the decocker, a Variant 5/6 detent plate is what is needed to make the change, and can be ordered from HKParts.net. I also managed to snag a USP Compact ambi safety and was able to mate it to the HK45 with a little patience and an Exacto knife.

The gun now agrees with me all the more better as previously I was mashing down on the safety lever too much and would start to decock the gun and every now and then I'd fully decock it and I could feel the muzzle dip. The ambi safety is purely for IDPA and classes where we work off-hand shooting quite a lot. Some don't like it, some could take it or leave it, but I'm starting to prefer them. 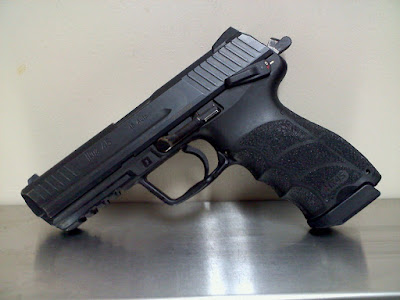 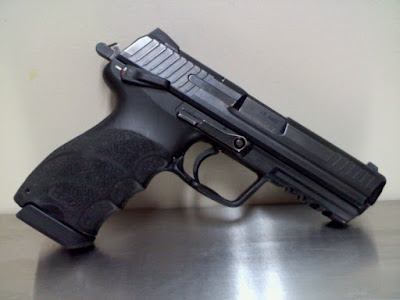 And here are two pictures from a target @ TDI, range was only about 5 yards or so, but the drill was shooting one round free-style, one round strong-hand only, one round weak hand only, repeat for one magazine and it was right after I got done at the Live Fire House and was still a little amped up.  The goal is to have one hole. I need a little work, but over all I was pretty happy with the results of the second attempt. Both pictures are are 10 shot groups.

I'm finding I don't mind the factory sights as much as I though I would, but I need to replace at least the rear as I just can't stand the rear dots.


The after action review of TDIs Pistol II and III classes is almost done, I've never had a review take this long to write but it's been a hectic couple of weeks.

I spent the one weekend @ TDI, the following weekend was spent at the NRA PPOTH-I Course, and then Fri, Sat, & Sun of Memorial Day weekend I found myself at a NRA Training Counselor Workshop and am currently awaiting the paperwork to clear and be appointed and NRA Training Counselor....add into that IDPA, work, and being a dad & husband and it makes for a busy time.

Hopefully I will get the TDI review done Friday evening after setting up the classroom for Saturday's Iowa Defensive Pistol Class
Posted by JD at 11:53 PM