"Ultimately, everyone who needs to carry a pistol for tactical use or who keeps a pistol for self defense wants something that's completely reliable, uncannily accurate,powerful enough to deal with any situation, and familiar as an old shoe. That was a tough bill to fill until Les Baer introduced his 1911 S.R.P., an uncompromising single stack performer.

This is basically what Les & Co spec'd out for the FBI SWAT ( not to be confused with the FBI HRT ) pistol, that contract ended up going to Springfield Armory, but needless to say, the SRP is one heck of a gun.
This SRP is not 100% stock and the mag catch lock is buggered up, but I like the exisitng mods so far. The rear sight is a 10-8, I will probably remove the S&A magwell and re-install the original main spring housing that was included. Haven't shot it yet but plan on running it this weekend if the opportunity presents itself.
The presentation case is the older one that doesn't have the glass lid, the gun came to me with some G10 grip panels from either VZs or Mil-Tac (think of the factory grips on a current TRP) and Torx grip screws. The stocks on there now came from my other Baer and the slotted grip screws were floating around somewhere. I will probably replace the wood with more mild textured G10 panels from 10-8 and will be ordering some Dupont S grip screws along with the catch lock from Les Baer...
Range report to follow
Posted by JD at 11:48 AM No comments:

Email ThisBlogThis!Share to TwitterShare to FacebookShare to Pinterest
Labels: 10-8, 1911 Information 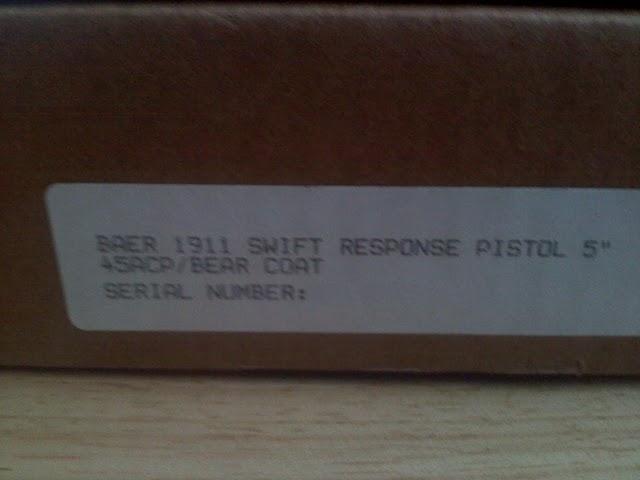 While I am more than fond of the 1911 platform and several other lower capacity firearms such as the HK P7, Sig 220 and even the Kahr line of pistols, the lack of capacity of a firearm can not be compensated for by simply carrying another magazine.

While carrying a spare magazine is wise and prudent, gun fights are typically won or lost with what's in the gun and while it never hurts to have additional ammunition on one's person, it will NEVER be as good as having more ammunition IN the gun to start with.

Regarding the Situation Across the Pond...

There's been plenty said about the rioting in the UK, all I have to say is this:

"Those who would give up Essential Liberty to purchase a little Temporary Safety, deserve neither Liberty nor Safety"


Should the anti-gun movement ever get their way in the US they would have us in the same boat...without so much as a paddle.
Posted by JD at 9:41 AM 1 comment:

Seto, 27, was tucking the little gun – reportedly a Taurus 380 Compact Pistol into his waistband as he walked toward the store with his girlfriend, Cara Christopher.
The gun went off. The bullet hit Seto's penis and continued through his left thigh.

Always, always, use a holster.

While browsing Sig's website and looking at new products I came across this:

The standard by which all contemporary sidearms are measured, The P226 became the most esteemed full size, high-capacity pistol from the moment it was introduced. Time has only enhanced its reputation. The P226 distinguishes itself in the hands of special forces, law enforcement professionals, and discriminating
citizens with uncompromising performance when it counts the most. The P226 German is manufactured in Germany. Features a black oxide carbon steel slide and anodize alloy frame.

Well that makes sense, I wonder if this is a result of slipping in their QC practices / other shortcomings of late here in the US? I also wonder of more German made guns will be finding their way into the US?? 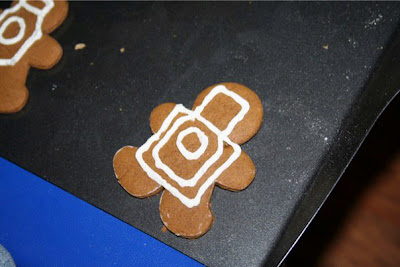 Shamelessly stolen from someone else...

"Trying to keep criminals from committing acts of gun violence by placing restrictions on normal law abiding gun owners--
Is like trying to keep drunk drivers off the﻿ roads by
making it harder for non-drinkers to buy cars."

Back from the 2011 WI State IDPA Championship...

I missed bringing home a plague by just shy of seven seconds. I placed 4th in CDP/Sharpshooters. Overall I placed 43rd out of 90. Had 3 penalties, one failure to neutralize, and one hard lesson learned. ALWAYS check your magazines before stepping up to the starting position. I left a stage with partials in my mag carrier and did not swap them out for fresh mags, cost me about 10 seconds.

Overall did pretty well, expect for the stages where I picked up the penalties I was within 2 or 3 seconds of the 1st place CDP Sharpshooter who is a regular at the Ames/Boone IDPA matches. The HK45 ran well and I made some good shots.

Justifiable Use of Force and You

Recently here in Iowa, in the town where I work and spend a heck of a lot of time, a man has been charged with assault and going armed with intent after chasing a trespasser off his property, had that been all there was to it, no problem. But the homeowner before chasing off the trespasser retrieved a handgun from his home and confronted the trespasser. The trespasser fled and the homeowner gave chase, left his property and then fired a warning shot at the trespasser after he had failed to adhere to commands to stop.

Here's where things get nasty.

704.4 Defense of property.
A person is justified in the use of reasonable force to prevent or terminate criminal interference with the person’s possession or other right in property. Nothing in this section authorizes the use of any spring gun or trap which is left unattended and unsupervised and which is placed for the purpose of preventing or terminating criminal interference with the possession of or other right in property.


704.7 Resisting forcible felony.
A person who knows that a forcible felony is being perpetrated is justified in using, against the perpetrator, reasonable force to prevent the completion of that felony.

713.3 Burglary in the first degree.
1. A person commits burglary in the first degree if, while perpetrating a burglary in or upon an occupied structure in which one or more persons are present, any of the following circumstances apply:
a. The person has possession of an explosive or incendiary device or material.
b. The person has possession of a dangerous weapon.
c. The person intentionally or recklessly inflicts bodily injury on any person.
d. The person performs or participates in a sex act with any person which would constitute sexual abuse under section 709.1.
2. Burglary in the first degree is a class “B” felony.
3. For purposes of determining whether the person should register as a sex offender pursuant to the provisions of chapter 692A for violations of subsection 1, paragraphs “a”, “b”, or “c”, the fact finder shall make a determination as provided in section 692A.126.

702.16 Reckless.
A person is “reckless” or acts recklessly when the person willfully or wantonly disregards the safety of persons or property.

708.8 Going armed with intent.
A person who goes armed with any dangerous weapon with the intent to use without justification such weapon against the person of another commits a class “D” felony.


To make a long story short, The guy saw someone trespassing, which is not 1st degree burglary, grabs a gun, goes out to confront him with a gun, the buy bolts, the home owner gives chase leaving his property, and then fires a warning shot into the ground when someone almost 7 yards away "takes an athletic stance"

At no point was he A: Defending property. B. Defending himself or another. C. Acting to prevent a forcible felony.

The trespasser at no time demonstrated ability, or opportunity to put the home owner in jeopardy from a reasonable person's perspective of the situation. Going armed with intent will probably be dropped as he will probably plea down to the assault charge which if the article (which I think made a mistake as "aggravated assault" does not appear in the Iowa code) is correct in the chain of events.

I'll ask around and see what the deal is with this, I'm actually surprised I didn't hear about this sooner....

As to the intent of the trespasser, I doubt he was looking to pick flowers, but as someone who recently went looking for a lost pet in the neighborhood...stuff happens and sometimes truth is stranger than fiction.

We'll see how this one pans out but it doesn't look good for the homeowner.

No, not Back Up Gun...the bug that bites you and starts the gears turning about that next purchase. I've got it bad. There's four guns on my want list right now. I've been shopping around for an AR in .308 for a while and have pretty much settled on the Colt SP901 once it's available (barring any serious issues with the gun of course), but I've been wanting to add a single action revolver, preferably a .45LC/45ACP Ruger Blackhawk Convertible to my collection for use in NRA classes, but then there's the deal I found on a Les Baer SRP that's honestly too good to pass up, and of course there's the HK P30S /LS that I've been wanting for about two years...

So...what's the gun bug got you going after?

On a side note, I've started clearing out the holster crate and have raised almost $300 to go to my next gun purchase. That's pretty close to the price of the Ruger .45 I saw over the weekend and almost half way to the HK, but not quite 1/4 of the Colt or the Baer. Gotta' give it more time I guess.
Posted by JD at 11:16 AM 2 comments: