More people than ALL other calibers combined!!!!!!

This is one of my favorite misunderstandings to to hype, regurgitation, and lack of reading comprehension and maybe just a bit of gun shop know-it-alls.

So we've see this claim, I will use the most recently seen version.


"Some years ago, I ran across a DOJ study that concluded .22LR ammo has killed more people in the USA than any other caliber(s)."


That DOJ study can be found HERE in this 1989 study which states:

"Probably more people in this country have been killed by .22 rimfires than all other calibers combined, which, based on body count, would compel the use of .22’s for self-defense. The more important question, which is sadly seldom asked, is what did the individual do when hit?"


"Probably" does not equal "conclusion."

"Probably" as defined by Websters:

: insofar as seems reasonably true, factual, or to be expected : without much doubt
happy> rain>

But is the statement above reasonably true?
Now granted this is not 1989 and we have some new studies, most recently Greg Ellifritz's An Alternate Look at Handgun Stopping Power  which has some pretty interesting data on the little .22 in that of the handgun calibers, it had the 2nd highest percentage of hits resulting in a fatality and the 3rd lowest rate of incapacitation.

Seems kind of paradoxical, doesn't it?

I asked Greg about this and he told me pretty much what I expected to hear:

I think the two may be somewhat related...It's a small bullet, it doesn't incapacitate well. I 'm guessing that many of the people who were hit with it (even seriously) didn't know they were hit. They didn't immediately go to the hospital for treatment. By the time they recognized they had a problem, it was too late and they died.
Many of the people shot were criminals. They don't want to go to the hospital with a gunshot wound. They see a little .22 hole in their skin and they say "that ain't shit" as they slowly bleed to death internally.
One other factor to consider is that the .22 is outside lubricated. It picks up all kinds of crap as it goes down the barrel and through clothing. It carries all that crap into the wound. The death rates from infection are likely higher with it than with other bullets.

Lets look at some other data we have, the original source of this claim comes from 1989, in 1995 we had this paper, Guns Used in Crime which contains these tidbits of info regarding caliber: 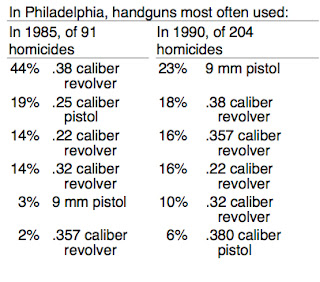 In this other document, Homicide Trends in the United States 1980-2008 we have the following point to consider:

Data in this report are from the FBI’s Supplementary Homicide Reports (SHR), unless otherwise noted. The SHR Program of the FBI collects yearly supplementary homicide data regarding homicides committed in the
United States. Statistics in this report detail homicide trends by age, sex, and race, including homicides of children under age 5 and of persons age 65 or older. It examines the relationship between the victim and the
offender, particularly in cases of intimate and family homicide. Th e report also examines multiple victim and offender homicides, circumstances surrounding the death, justifiable homicides, law enforcement offi cers
killed, homicides cleared, and homicide trends by city size and weapon use.

These data may differ slightly from previously published versions because of updates to the data file, changes to the imputation methods used, and refinements in the analyses. (See Methodology for more information on the imputation methods used in this report.) In addition, analyses presented here include data from 1980 through 2008 only. This modification was made, in part, to reflect revisions in the SHR in 1980


If you look at the FBI's coding of the SHR data you find the following*:

Aside from some other mumbojumbo therein, you won't see any mention of caliber in that report. As such, I would wager that the statement in the report initially quoted has no supporting data.*It is possibly that before 1980 caliber was listed, but I have not yet been able to confirm if it was or was not.


Greg's study is geographically limited, but it stands to reason that the results would average out.

So what does all this mean? I don't think it comes up with anything too concrete other than that when you look at the ratios of what guns are used in crimes, what guns criminals prefer, the fatality stats shown above I think it's on the level to say that while the .22 can certainly kill, it is not "responsible" for more deaths than "all the other calibers" combined, but hey...I could be wrong.

In a pinch I would much rather carry a .22 than nothing, but thankfully I can manage to carry larger.